“What does this town have?” She asked with utmost seriousness.

I had a feeling I knew what the answer was going to be. It was like walking through the door of a New York hotel room; what you see is what you get.

If we’d been talking to a modest man, I may have been correct in my assumption. But this was no ordinary man. He was not for a single second deterred by the question. “We have a convenient store across there. Of course there’s the award-winning restaurant. They go in their with money in their pockets, and they come out with their belly’s full.”

He said this with an endearing contentment of the life he’d spent in this town. He had a hop in his woolly-socked steps, and pleasure in his soul.

He was the candle-maker.

I’ve seen lively towns, and I’ve seen dead towns. This one still had a flutter of a heartbeat.

It was the end of summer, however something told me that is was not a bustling summer town, partly because of the absence of a chip stand, which is practically a must in any summer tourist town in Canada.

Truth be told, the Trans Canada highway decided to give this town a miss. Most wheels don’t hit the streets of Victoria by the Sea, but continue to speed down the highway.

It’s fair to say we had no intention of visiting this town when the day had started. We didn’t even know that it existed. Yet here we were.

We rolled slowly down the main street overlooking the water, eyeing off a potential parking spot for the 31ft motorhome.

With the absence of a designated spot for motorhomes, we parked on an empty patch of land by the waterside. The residents in the adjacent apartments had, for a short while, their water views built out.

Climbing out the camper was like any other time, one foot after the other. Yet looking up, we were confronted with glimpses of a beautiful oncoming sunset. It was a seaside village, quaint and charismatic.

But for all it mattered, this place could have been a ghost town, desolate and empty. All we needed was a key. 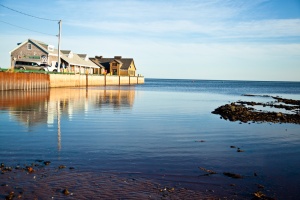 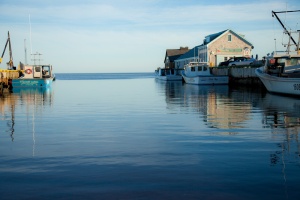 An hour earlier, we’d stopped at a visitor’s centre. Surely, at this time of year a prominent castor of light would let us ascend it’s stairs, and grant the wish of a little heart.

A ten minute conversation with the historical board had recommended that the owner of the pastel blue shed would hold the key.

On the corner we found the pastel blue shed. The windows allowed us to peruse the belongings inside. Along side an old bike were some tools. We could only assume that they were for candle making. This was the candle maker’s store.

However, the door was locked, which could be expected when the sign hanging on the door read ‘closed’.

We decided to try the house nearby. The sound of empty tapping repelled against the old wooden doors. Out on the street, a passer by said they should be home, so we tried again. The door remained shut. There were no footsteps. There were no voices.

Similar to the candle maker’s store, his house appeared empty. As we stood slightly helplessly on the front porch, we suddenly heard a voice, “Come to the side door”.

We shuffled the kids around to the side, and a woman met us.

There was a brief moment were it felt weird to be relentlessly tracking down the owner of an attraction that we wanted to see. Luckily this was a small town, because you couldn’t get away with this in the city,

“We heard your husband has the key?”

She looked around over our shoulders like he should be out in the front yard somewhere. “He should be home, we are due at our daughters’ for dinner shortly.”

We didn’t move. She seemed more perplexed by her husbands whereabouts than the strange family standing on her lawn. Almost like a complimentary prize, yet in fact a truly lovely gesture, she gave us as many pears as we could hold.

So now we were standing on the side lawn of a strangers house, holding pears, still looking for a key.

As if this were fiction, in the exact moment of our awkwardness on the side lawn, holding pears, she says, “Oh there he is.”

Without dropping a single pear, we pivoted 90 degrees to see a gangly fella on a bike. He looked delightfully happy, carefree, and surprisingly well dressed for a guy on a bike.

Moments later we shared our story of our search for a key. He instantly started to lead the way. The key was in his pocket.

As the key jangled on the key chain, the kids could hardly contain their excitement. The key fitted the slot. Suddenly the big red door swung open, and we stepped inside a lighthouse.

The ground floor was the ‘Keeper’s of the Light’ museum, but there was no stopping the kids, as they climbed the stairs and looked out over the ocean. 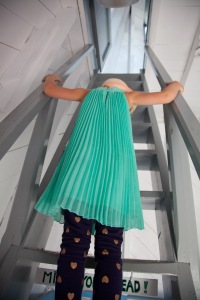 Nearly six months after leaving Ontario, we had delivered on our daughter’s dream to climb inside a lighthouse. We’d got lost looking for a one in Seattle, and with most of the summer season attractions on the East Coast closed by the time we got there, we feared that we’d missed the opportunity.

But with commitment and determination, a big adventure delivered a little treasure.