Driving a 31ft vehicle can be a challenge, especially when you drive it everywhere!

As we’ve hit 10,000 miles on our trip around North America, its time to take a look at the hurdles and challenges we’ve faced, and decide whether Sparkles* (our Motorhome) or North America can claim the title!

* Sparkles (our Motorhome) may not be the most fitting name for this heavyweight title fight. I preferred Grizzly, but when we’re out for the day and I say ‘let’s get back to Grizzly’, the kids always correct me and say “No… Sparkles!!” So Sparkles it is.

LET’S GET READY TO RUMBLE!!!

Round 1: Sparkles vs Really small streets

Early on in the trip Sparkles was touring through the ridiculously small downtown streets of Gettysburg. It was only my second day of driving (a rig), and as I pulled up to a set of traffic lights for a right hand turn, a car pulled up at the lights on the right, narrowing my turning circle.

As I took the corner, the back tire clipped the gutter and we heard ‘pfffffffff’.

Not the sight you want to see on Day 2!

Round 2: Sparkles vs Bugs

An unfair match-up really. The bugs don’t really stand a chance. High speed, truck sized window, and the final blow is an overhanging cab. So even if the bug hits the windscreen lightly, they get sucked up and find a permanent spot on the underside of the cab. Goodnight bugs.

Round 2 winner: Sparkles by instant knock, but there is always another bug so the fight continues 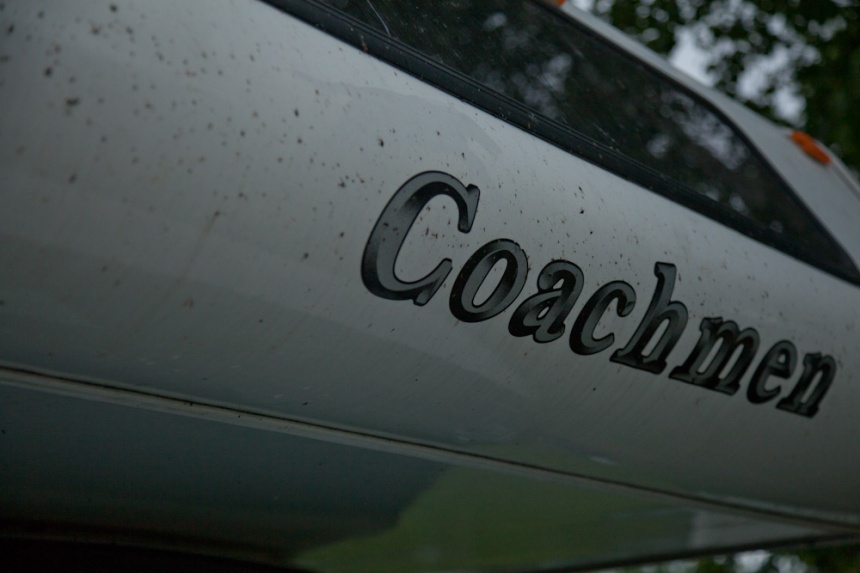 Round 3: Sparkles vs Parking tickets

An evenly matched round. Sparkles earned back-to-back parking tickets in Tennessee for taking two spots and only paying for one. The instructions weren’t clear, and both parking lots were almost empty. The ticket says the vehicle was registered is Oregan… and it is not.

Round 3 winner: Sparkles by default of the privacy law.

Round 4: Sparkles vs Roadwork

The ‘RV unfriendly detour’ combo involved removing us from the comfort of a main road to a back street, where we faced a rapid fire series of parked cars, overhanging trees, gas guzzling stops and starts, pot holes, speed humps, and other RV shaking obstacles.

The ‘Do what we like highway roadwork’ combo was a never seen before combo, and the legality of the combo is still in question. There was no structure to how roadwork was carried out in the USA, and the conditions were as equally poor and dangerous for both driver and workers. However, a rather unfair fine of $10,000 was imposed for drivers hitting a workman. The workman on the other hand could inflict the most ridiculous driving conditions, including driving on the shoulder of the highway over ‘rumble strips’, and seriously narrow lanes caused by the placement of the road safety cones/barriers.

In an overview of the round, Sparkles shone! It ducked and weaved the roadwork punch combos. On one patch of road, where the cones were placed so far over in the driving lane, Sparkles clipped a couple, sending them hurtling over the empty highway.

Round 4 winner: Sparkles by 1 point, earned by sending a cone over 3 lanes of empty highway and into the ditch. No workman were hit or injured during this round.

We have to drive on the right… thanks!

Round 5: Sparkles vs Moves that are much easier in a car

This round will go down in history as a classic! Sparkles was faced with some seemingly impossible 3 point turns. Namely, on a two lane roadway outside of Seattle, Sparkles cleverly used a driveway (which disappeared at about a 45 degree downward slope toward a waterfront home) to navigate a 3 point turn without stopping traffic.

The biggest benefit of a Motorhome over a 5th wheel or a travel trailer, is that we can reverse more easily (especially because we’re not towing a car). But still, the sight lines are very different on a long vehicle, which has a 10ft overhang from the back tires. Directly behind the vehicle is a complete blackout zone, so you need to be very conscious of everything around you at all times. Thankfully, moving in reserve has been successful to date!

Driving forward is sometimes harder. For example, many places kindly offer RV parking. Surprisingly though, unless it is a large ‘bus zone’, they make one painful mistake. Despite making the space double long (compared to a car spot), they don’t make them an inch wider. It basically means that if there were 4 spaces, only 3 RV’s would fit. In downtown Banff, with my wife standing out front directing me, I drove the vehicle into a space that many would not dare to attempt. When parked, I had an inch on either side of the vehicle to spare (with the side mirrors folded in)!

It was equally as tight when I pulled Sparkles into a Mr Lube in Vancouver. We told the guy how big the Motorhome was, and he said ‘yeah it’ll fit’. I did not appreciate the look on his face when we drove it towards the entrance. He ushered the other mechanics around as they all helped me navigate Sparkles into the garage. I honestly don’t know how we squeezed in!

Round 5 winner: Sparkles by driver skill 😉

Round 6: Sparkles vs Winnipeg

This city gets so cold in Winter, the roads are just torn apart once the 1 month of summer rolls around. On most highways, any significant bump is accompanied by the following sign: 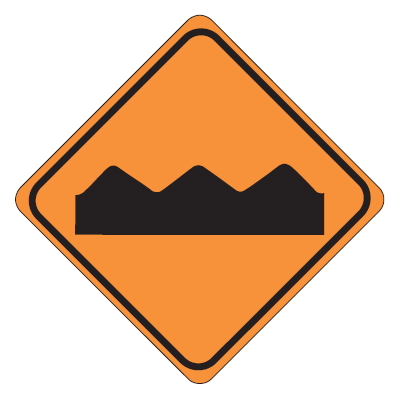 If Winnipeg employed the same criteria, the side of the street would be lined with these signs.

It was no surprise that the no.1 local business was windscreen repairs.

Round 6 winner: Winnipeg by the worst roads in Canada (this includes Moose Factory which has no paved roads, and driving is a bit like slalom skiing over potholes).

Round 7: Sparkles vs Shopping trolley

The weather system is the USA is frightening at times. The speed and ferocity in which a storm can hit is freaky. One particular evening, we pulled into a Walmart seconds before a storm hit. The wind picked up and it shook the camper violently. The rain pelted down. And as my wife put the kids to bed, and I packed up the Motorhome for the night, an object suddenly slammed into the camper. It hit so hard I had no idea what it could possibly be. I looked out the window to see a shopping cart now on its way across the car park at high-speed.

Thankfully the shopping cart caused no damage, but it was a scary experience.

Round 7 winner: Sparkles by deflecting a solid punch, and avoiding all other shopping trolleys (which are a common threat at Walmart).

Some days were meant to be cancelled, not proceeded with, shut down… you know, where you just go back to bed and forget about it.

This was one of those days.

After looping the city of Calgary to try and find a parking spot, we finally agreed on a paid parking lot. As we turned in, it became a no turning back situation. Behind us was a busy city street, and in front of us was the boom gate. I grabbed a ticket, the gate was raised, and we started moving through. As we turned to the right, I knew that the turning circle was tight. Really tight! As I turned Sparkles enough to miss the row of parked cars, I heard the first sound of crunching. I’d just smashed the rear left-side tail light. At this point I can do nothing but proceed forward. I managed to snap part of the boom gate off, but that was my last punch. The toll booth removed part of Sparkles and the momentum in this battle shifted.

AFTER 8 ROUNDS: THE FIGHT IS EVENLY MATCHED, AND SPARKLES IS SLIGHTLY AHEAD AT 5-3

HOWEVER NORTH AMERICA HAS CONSIDERABLE MOMENTUM AFTER THE 8TH ROUND, AND THIS ONE IS GOING DOWN TO THE WIRE!

THE ALL IMPORTANT ROUND 9 MAY BE CRUCIAL IN DECIDING THIS BATTLE.

Round 9: Sparkles vs Fuel consumption

I’d heard bad things about the petrol/gas consumption of Motorhomes.

Sparkles took an upper hand when I heard from a 5th wheel owner that their mileage was similar to our Motorhome. We’d considered a 5th wheel thinking that the mileage would be a bit better, so that was nice to hear that this was not the case. Plus we’d overlooked the fact that the truck pulling the 5th wheel has a much smaller gas tank, so they need to stop twice as often to fill up.

However, the reality is that a 55 gallon tank is expensive to fill, and we get about 10 miles per gallon. This reality became even more shocking when we entered Canada, as the gas prices were remarkably higher than the USA.

Round 10: Sparkles vs Rocks:

Sparkles may beat all bugs that touch the windscreen, but has been less successful against rocks. There’s been a few minor surface scrapes and one big crack which looks a bit ominous. For the distance travelled it has been an evenly matched battle. However, ongoing bumpy road conditions means that existing chips may have the last laugh.

Round 10 winner: Rocks by likelihood of replacement windscreen

Despite leading almost the entire fight, North America came back to tie this one at 5 rounds a piece. After the judging, Sparkles emerges as the victor as the challenges we’ve faced have truly made this an amazing adventure. Sparkles is a true champion! 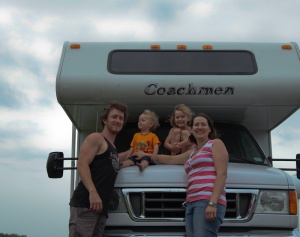